I want to tell you about very special objects from Ancient Egypt. I picked objects that not just tell you the history of Ancient Civilization, but also very important to me.

All these objects is the part of amazing collection of Poltava Local Lore Museum, from my own city in Ukraine. They were gathered by one very generous and passionate man – Pavel Bobrovsky. He started to gather his own collection in 1894 while he traveled in Africa.

Main part of collection represents burial traditions. We have plenty of amulets from tombs of New Kingdom, and each of them can tell you a lot about the history of Ancient Kingdom.

It is a real treasure as we can determine its age as almost 6 000 years. We think, that it was made almost 4 000 year B.C. Unfortunately due to a fire that took place at the museum during World War II, many priceless items from the collection, among them the Predynastic Egypt and the pot partially lost its color. Some things have been lost altogether.

Shape and pattern – in particular, geometric lines and image elements of the plant world, and the place where they found these things – Upper Egypt suggest that maybe they relate to culture Naqada I, II. This pot was found in the ordinary grave. The dead of that time usually were buried in the fetal position, rolled in animal skins. 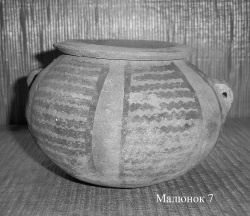 2. Tyet or the knot of Isis. This religious amulet was usually worn by women. Goddess Isis, the wife of the God Osiris, was considered the patroness of family, magic, and women. Amulet was named after her because of its resemblance to the belt buckle of Goddess. Most often it was made of red stone. This amulet mentioned in the Book of the Dead, Chapter CLVI. 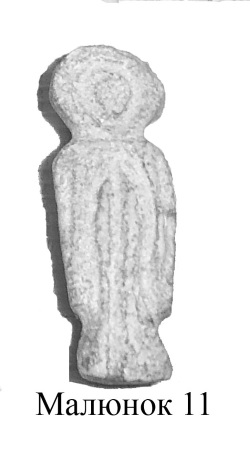 The largest religious content of the collection is filled with items monument called – Ushabti. Ushabti – the statuettes that were placed in the grave (tomb), together with the deceased. Ushabti rooted the rituals of Predynastic period. In those days, after the death of the deceased killing his beloved wife, his servants or even the child if the dead had many of them, as well as animals, he loved in his life. It was believed that they would serve the deceased in the afterlife – Duat.

In our collection is stored many Ushabti, we can assume that they come from the funeral of deceased pharaohs during the late New Kingdom. Some of them are depicted with the royal regalia, and several Ushabti  had names of the royals.

4. To my opinion, one of the most interesting artifacts in this collection is the relief image of Pharao from Saite Period, late New Kingdom, Dynasty 26. Historians and researchers from my region can not tell exactly who was pictured in this image. The image was found at Thebes. Reliably find out who exactly is depicted on this fragment is almost impossible due to the fact that the Pharaohs of this dynasty – Psamtik I, Necho II, Psamtik II, Apries, AmasisII, Psamtik III trying to revive cultural traditions of the Old Kingdom used the same techniques. We can see in this image that in times of Saite Dynasty was a cultural revival of Old and Middle Kingdoms. The main reflection of this theory was the practice to transfer items from ancient graves of Old Kingdom to the tombs of nobles from the New Kingdom. They even made copies of ancient drawings in tombs.

However, according to the opinion of local archeologist O.Suprunenko, this image has been created in the 6 century B.C. That means that it can represent Psamtik I or Necho I. As we can see the Pharaoh had the crown of Upper Egypt. The logical question is why the Pharaoh who was the owner of Upper and Lower Egypt wears only one crown? It is important to notice, that from the legendary Pharaoh Narmer, every King tried to highlight the fact that he is an owner of two Lands. However, we know that Psamtik I had troubles with several nomes in Upper Egypt, and maybe he wanted to show by this image that he is finally reunited all Egyptian lands. After he took Thebes, it is possible that he wanted to show it.

However, it is also possible that it was an image of self-proclaimed King Tantamani, who was an enemy of Psamtik I and member o Nubian Dynasty. His capital was Thebes, and he had a power over some lands in Upper Egypt till 658-657 BC. 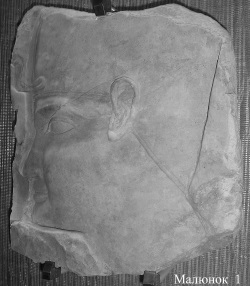 In Greek, this name means “Little Ptah”. Statuette belongs to the late period of the New Kingdom. This period of the Ptolemaic dynasty. Then in Egyptian cosmogony appear minor Gods – guards houses of poor Egyptians and the middle class. Features of the Egyptian Gods in that time mixed with Greek and Roman features. Thus, we can see the new cult of Serapis God, combining the features of ancient Egyptian Gods Osiris and Apis and the Greek god Anthea. In this time was created the figure of Patatakoi, or small Ptah, who is now in the museum collection. Patatakoi symbolizes the original chaos. Name him – Phoenician. Baby or Dwarf image of the God indicates the beginning of everything, that was created by God Ptah, the patron of Memphis. Local cosmogony considered him as the ancestor of all Gods. His small image symbolized the foundation of the world. It shows a small image of Ptah and his own start.

Relics of the New Kingdom period, also represented in the collection of four canopic jars. Canopic jars – pots with the viscera of the deceased. Unfortunately, the exhibition demonstrates only two surviving canopic. The other two are represented only by their covers.

By tradition of the funerals viscera of  dead had to place in four canopic jars. Covers represented the canopic sculptures of gods – Horus children – Duamutef, Hapi, Amset, Qebhsenuf. We have canopic jars of  Duamutef and Qebhsenuf.

Covers of canopic jars belong to a later period, Hellenistic Egypt. Significantly, till our time canopic jars have not lost their colors. 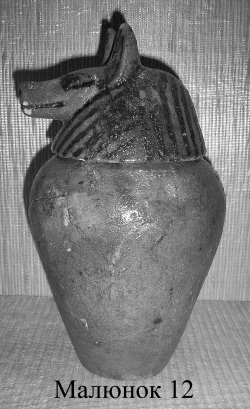 I characterized only very small part of Poltava’s collection. I took the information from my own scientific paper.

During my work I used such literature: