Everyone has a little something in them that might surprise others. For me, it’s a head-banging, mosh-pitting, horn flying metal head. Now, granted going back 10 years this was not so unbelievable, but today I get the “I would’ve never thought…” reaction. Good times.

Back in the day my cousin told me about a festival in Germany, “the largest open air metal festival in the world” she said. My ears perked up at that very sentence, and from that day I decided I was going to be at that festival one day.

In 2010 the opportunity arose for me to take a leap of metal lovin’ faith and be present at Wacken, Germany’s 2011 Open Air Festival. I was not going to miss this.

I prepared to spend a quick one week in Germany, and 3 days of that excursion would be camping on WOA event grounds in the small village of Wacken. Wacken, Germany homes a population of 1,800 on an average day, and 75,000 during the largest open air metal festival of the year. That is elbow to elbow metal heads from around the world!

I stayed at the Meininger Hostel in Hamburg the night before catching a train toward Wacken. When we reached Wacken, WOA had dedicated buses to take us the rest of the way to the event grounds. There was so much excitement in our bus, and people from all over. I met Turks, Brazilians, Russians, Brits and of course, yea, Germans. Everyone was super pumped to be going, and more people than not were actually going again. Some dedicated WOA goers had been returning for years, or even since the festival began…and they continued wearing the event entrance bracelets to prove it.

Finally, our bus arrived at the Wacken Open Air entrance gates. I was there, the Mecca of metal, Wacken. I gawked for a bit before following suite and getting checked in. After obtaining my entrance bracelet I continued toward the event grounds where hundreds of people already set up tents and were flying their country flag next to it. When I found my camp site, I quickly set up my tent and went to look around. Hundreds of people quickly turned into thousands of people; the grounds were filling up and there was much chatter about upcoming shows and stories of journey’s to get there. I headed toward a local shop to grab a bite to eat and enjoyed seeing local beer vendors setting up shop. I am sure that weekend of festivities brings most businesses enough money in to last them through the year.

I continued on, probably with a smile etched on my face, watching everyone and admiring the little village. The air was so fresh, the landscape was beautiful and clean, and I noticed that every house I walked by had an immaculate garden. Absolutely gorgeous.

After enjoying a fun-filled Thursday of travel and the bands that started off our festival, Ozzy Osbourne was our final show on the first day. I was pretty stoked, I wanted to see Ozzy at least once in my life while he was still kicking. It’s iconic Ozzy, right?! So after he put up the best show he could, it was about 3 a.m. and time for everyone to retreat to their tents for the night. To make this long story short, I could not find my camp ground, or my tent, or anyone that I recognized.  I walked around what I know now to be campgrounds that I believed to be mine, but were very much not, for 8 hours. I pretty well walked in circles, passing by the same loud never-sleeping Norwegians time and time again, just hoping I would find my tent soon. When it began to rain in the wee hours of the morning, I slipped into a porta potty for shelter and a little shut-eye – very little of course, I was in a portable toilet house after all. I stayed in there for 30 minutes to an hour then decided to venture back out to continue my search. I started my circular pattern of trudging again and then just sat in the grass to take another break – after one day at a metal festival I have now noted that grass, off to the side of a road translates to urinal. Ew. By this time I am losing hope, thinking I am not going to ever find my way back and I will miss my plane back home and end up getting lost in the small village of Wacken. A little dramatic maybe, but can you blame me?

When the sun began to rise I got a much clearer view of the after effects the events of day 1 held. I have never seen such creative beer can and duct tape structures in my life. Metal head modern art. I walked over to the breakfast area to sit down, most everyone still sleeping, but a few getting up and around. Shortly after taking my seat and deciding to just go with the day, I saw a British guy that I knew set up tent next to mine. “Paul! Take me to my tent, please!” He was surprised and asked if I had been out all night. I briefly told him my adventure and after a slight look of pity I think, he got me on the right trail to my weekend home. 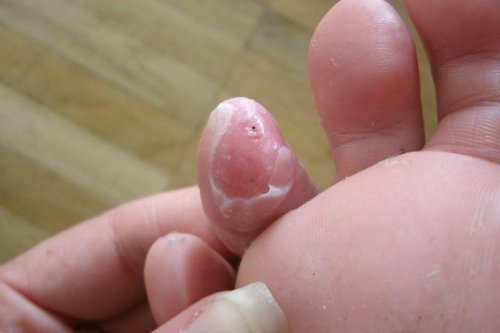 Blister! I had a painful blister from hell on my toe, and I was so glad to be back. It was when we got closer to our campsites that I realized I was no were close to where I should have been last night.  Terrible. I am glad to report that was the worst of my experiences at Wacken though, it was a fantastic 3 days filled with music, extended metal family, food and exploring.

At W:O:A 2011 I got to see bands I don’t think I would have had the opportunity to see in the Sates, some I had seen many times before, and a few I’m sure I could see back home, but this was way more fun! Some of my favorites were:

When it was time to leave Sunday morning, August 7th, 2011, I was tired, stinky and so happy. I made a goal to be at WOA, and I was there. I experienced it and took it all in. As I packed up my tent and belongings, new friends passed by and we said our goodbyes. I took a few long gazes around the grounds while waiting in line for a bus, and after 3 days of such an event Wacken no longer looked as pretty as it had on day one, nor did it smell as fresh. Granted, the mess mostly stayed on the WOA event grounds, but still… Wacken recovers each year and opens its arms to more bands and out-of-towners the following year. It’s an amazing community and a great host. Thank you, Wacken! Rock on!

“I don’t know how music works, I’m just glad that it does.”
― Lou Brutus